4 ways to be a vegan ninja 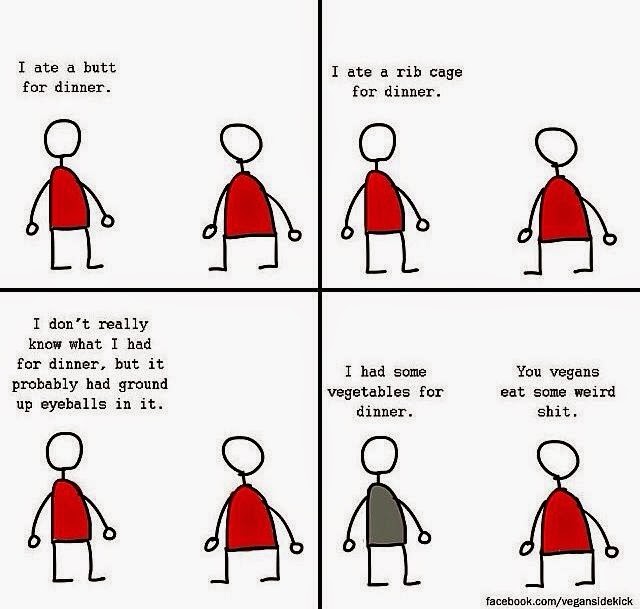 Humane Research Council did a study in which they outlined a bunch of useful stats on veganism/vegetarianism. One of the things they pointed out was that 63% of former vegans/vegetarians didn't like how they stuck out in the crowd.

So I thought I'd write about how not to stand out in the crowd.

1. Don't intentionally stand out. This one is obvious, but, if you've gone veg for animal reasons maybe you feel like you need to defend animals at all times. I have a closet full of pro-animal shirts, but I only wear them when that's who I want to be. Sometimes I'm out wearing a pro-animal shirt and I stop feeling like being a spectacle, so I turn the shirt inside out, and voila, I'm normal.


2. Casually keep it a secret. If you go out to eat with non-vegans, and somebody asks why you're abstaining from cheese, just casually say "eh I don't really like cheese" or "I'm just not feeling the cheese tonight". Usually, if you downplay the importance, people will let it go. People have all kinds of dietary restrictions and allergies these days. If they don't let it go, just say "it's complicated" or "it's a long story" and brush it off.

If somebody asks directly about your vegan/vegetarianism, it may be a good opportunity to advocate. But if you're not in the mood to be a spectacle, and somebody asks "hey you're a vegan aren't you?", it's within your rights to say "na, I just eat like one".


it's within your rights to say "na, I just eat like one"


At the restaurant, make it out like holding the cheese is a specific request and avoid using the word 'vegan'. If you need to know whether something has meat or cheese, by all means ask, but act as though you're just not in the mood tonight.


3. Practice. It's really not hard to blend in, once you start learning how. If your meals are always about veganism, try going out with omni acquaintances once and challenge yourself to keep it a secret.


4. Hang with veg friends. Community support and social pressure are incredibly powerful forces. If you've never been together with a group that is all vegan, you don't know what you're missing! The social reinforcement is well worth getting out to that meetup, conference, or retreat.

By allowing ourselves to relax in social situations, we can avoid alienating ourselves and others, and make it more likely that we'll stay veg for the long term.
Posted by Owen at 9:15 PM No comments: 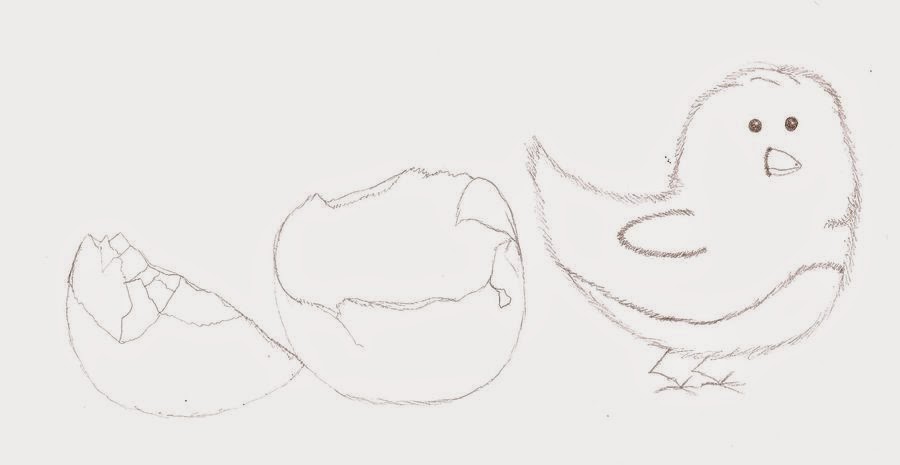 it seems obscure
yet I assure
that what we eat
and how we treat
our furry friends
and mother hens
affects our heart
in no small part
Posted by Owen at 8:42 PM No comments:

10 reasons not to give animals rights

Imagine that it's before the abolition of slavery, and you are a normal person. One day, you wake up and realize that slavery is immoral. You begin to see everything differently. You feel compelled to speak out, but alas, nobody wants to hear what you have to say. When you raise the issue with others, they dismiss your concerns with one or more of the following 10 reasons.

The following 10 reasons not to abolish slavery are being used around the net by liberty proponents, towards the abolition of government. I found them also to be eerily similar to arguments opposing animal rights.

The philosophy of Star Trek is a vegan philosophy.

You don't see it on the surface, because the characters aren't vegan. They replicate chicken dishes and shrimp gumbo. But the philosophy is vegan, and if we ever evolved to a Star Trek -like future, we would all be vegan. (Actually I think we'll all be vegan long before we have interstellar travel, but that's for another post.)

You can't watch a season of Star Trek without coming across the Prime Directive. Everyone in the Federation (that's Earth and her allies) is intimately familiar with this central tenet. You could go so far as to say it's the most important common value held by Federation citizens. While the directive is most explicitly concerned with the dominant species on planets visited by Federation ships, the core ethic is one of general non-interference.


"The Prime Directive is not just a set of rules. It is a philosophy, and a very correct one. History has proven again and again that whenever mankind interferes with a less developed civilization, no matter how well intentioned that interference may be, the results are invariably disastrous."

The Prime Directive has been further defined this way:


As the right of each sentient species to live in accordance with its normal cultural evolution is considered sacred, no Star Fleet personnel may interfere with the normal and healthy development of alien life and culture. Such interference includes introducing superior knowledge, strength, or technology to a world whose society is incapable of handling such advantages wisely. Star Fleet personnel may not violate this Prime Directive, even to save their lives and/or their ship, unless they are acting to right an earlier violation or an accidental contamination of said culture. This directive takes precedence over any and all other considerations, and carries with it the highest moral obligation.


This attitude is reflected in episode after episode, where the crew takes great lengths to avoid harming or interfering with alien beings. For example, in Nothing Human (Voyager), even though a crewmember's life is at stake as the alien sucks away her vitality, as many precautions as possible are taken to protect the alien life as well. In Justice (TNG), they even go so far as to risk Wesley Crusher's life out of respect for the laws and customs of another culture.

Sentience as the litmus test

So what does all this have to do with veganism?

The Prime Directive is mostly focused on not introducing new technologies, or even sometimes just ideas, into developing cultures; it's not hard to extrapolate from here that enslaving, breeding, and killing an alien race to suit our convenience would constitute a gross violation of their normal cultural evolution. And yet, that's exactly what we do to the races of pig, cow, and chicken on Earth today.

It's quite clear that the values of Star Trek require fair treatment of alien species. The question then is only one of which species qualify? And in particular, would nonhuman Earthling animals qualify? What is the test of whether a species qualifies to be treated with respect?

In the Star Trek universe, sentience is bestowed on even the most foreign of species; blobs of goo, giant jellyfish space beings, and computerized intelligence, to name a few. 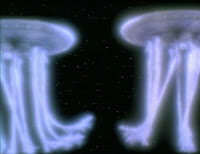 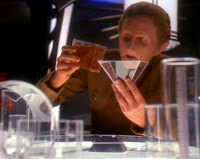 So why not nonhuman animals?

The French have already discovered that the blackness of the skin is no reason why a human being should be abandoned without redress to the caprice of a tormentor [see Louis XIV's Code Noir]... What else is it that should trace the insuperable line? Is it the faculty of reason, or, perhaps, the faculty of discourse? But a full-grown horse or dog is beyond comparison a more rational, as well as a more conversable animal, than an infant of a day, or a week, or even a month, old. But suppose the case were otherwise, what would it avail? The question is not Can they reason? nor, Can they talk? but, Can they suffer?
Bentham, Jeremy (1823). Introduction to the Principles of Morals and Legislation (second edition). Chapter 17, footnote.

Most or all of Earth's animals have that capacity, and as we move towards our idealized futures, we will inevitably be forced to confront and set right our own ethical inconsistencies.

would you take a stand for meat eating?


It's very difficult to be a vegan in today's world; restaurants serve relatively poor vegan cuisine if any, there is social ostracizing to contend with, and mostly, the social structures and habits aren't there to support this way of life. Few non-vegans would know how to begin purchasing and preparing healthy vegan meals. The social momentum is immense, and going against it takes a lot of dedication.

Now imagine for a moment if the tide were reversed: if 95% of the population was vegan, animal foods were the exception, and there was the usual social pressure to eat like everyone else. There is only one meat option at every third restaurant. Few know how to handle meat safely, or prepare it. Perhaps animal agriculture has fallen out of favor in the government and meat now costs much more (closer reflecting the hidden environmental costs of additional land, water, etc.). Perhaps most importantly, every time you mention that you eat meat you get inundated with questions about why and people telling you that it's not healthy (regardless of whether it actually is or not).

In that imagined world, how many do you think would take a stand for meat eating?

I think much more of dietary choices are because of "defaults" we have had programmed in from our society. Eventually, even most of the "tough nuts" will crack. I think if you saw 50% of the population being on a mostly plant-based diet, you would then see 80% not long after.

Eating animals -- why do people still do it?


Eating animal foods can be incredibly confusing. We see ourselves as kind, caring, even generous people who treat our friends, family, neighbors and pets with love and respect. Yet day in and day out, we are faced with the contradiction which is sitting on our plates: an innocent creature was killed to bring us this meal.

The example of long-term, healthy vegans shines a light on this contradiction like none other. It's hard to justify the need to eat animals with so many counterexamples out there. Can you really believe that eating animals is good for health when doctors are using a vegan diet to reverse heart disease, reverse diabetes, and slow cancer? When there are hundreds of vegan athletes, many performing better than ever before?

It's hard to conclude that we eat animals for any reason other than cultural momentum. And I expect that this subtly repressed fact rubs most of us more than we care to admit.
Posted by Owen at 2:09 PM No comments:

War is always a cost to the people

We do have one example in history where there was a dramatic cut in spending. It was after World War II. Because the spending was so high during the world war-- it was cut almost 60% and people worried, the Keynesians said "oh we have to have more jobs programs, more jobs programs". But by that time the malinvestment and the debt had been liquidated, the soldiers came home we didn't have work programs and guess what, the taxes were cut as well and that was finally when the depression ended. It ended not when the war started, but when it ended.

So don't ever be tricked into believing that so many argue -- because they use this as an excuse, they say that when you're in a depression or bad times the only thing that will get you out of the depression is a war. That is absolutely not true. Don't ever listen to them because morally that's evil and that is the wrong thing to ever try, because war is always a cost to the people.

Other blogs by me